Sam Caucci was once the bringer of boredom. Back in 2010, when he worked for an athletic-­coaching franchise called the Parisi Speed School, his job was to fly around the country giving employee training seminars. It was dreadful work. He’d arrive in a new city, pull employees off the clock, gather them in a room, and watch their eyes glaze over as he launched into a corporate-­approved lecture on procedures and protocols.

“Employees were never excited to see me,” he says. Nor would he see them again. He eventually realized that most of them were in their 20s or 30s, and they left the company so fast that he had to return to a location every three months to replay the same rehearsed spiel for another group of bored shift workers. “I started to realize my job wasn’t so much about the training itself; it was about trying to keep employees engaged.”

The revelation led Caucci to explore better ways to spread corporate knowledge, and in 2015, he went all in on an idea. He launched 1Huddle, an app-based tool that converts training manuals into mobile games. “The average millennial spends more than 10,000 hours on gaming platforms before they’re 21 years old,” says Caucci, citing a common industry estimate.

So 1Huddle taps into what people are already doing: Players — or rather, employees — earn points by competing against colleagues through timed rounds of multiple-choice questions. The games are fun (relatively speaking) and employees can do them piecemeal on their own schedules. Best yet, 1Huddle clients don’t have to fly someone around the country to host training seminars.

Soon after launch, Caucci saw signs of 1Huddle’s success: Employees played 83 percent of training games outside of work. “They were logging in not just to learn about the latest safety training but to beat their coworkers,” he says.

When franchisors are asked how they’re modernizing their brands and appealing to younger employees or customers, their response is often the same: “We’re embracing new technology.” For some, that means making the obvious tech upgrades—an online booking system for appointments, a digital kiosk for restaurant orders, etc. But 1Huddle represents a new kind of opportunity: It’s part of a rising industry of tech-fueled solutions that make franchise systems more efficient and profitable. And more companies like it will keep coming.

Previous Sick of weekend walks? Why not try roller skating!

Next 4 Reasons to Buy Bumble

5 Digital Solutions to Help Your Business Take Off

The 7 Best Tools to Digitally Transform Your Business in 2021

How to Reduce Tech-Related Stress for Customers and Employees 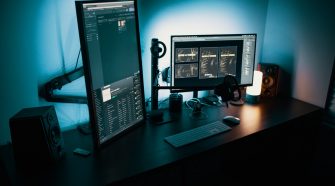 How to Reduce Tech-Related Stress for Customers and Employees